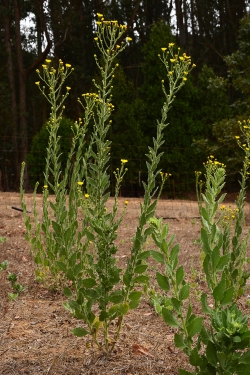 This month’s weed of the month is a twofer! Two weeds you may notice on roadsides are horseweed (Erigeron canadensis) and telegraph weed (Heterotheca grandiflora). Both are in the Asteraceae family with relatives sunflowers and daisies. These are pioneer species that are adapted to thrive in disturbance which is why they are common in urban and suburban environments. “Weed” in their common names is somewhat of a misnomer because both are in fact native to North America with historic range throughout Contra Costa County.

Though these plants are native to our area, humans have inadvertently spread these species elsewhere in the world. Horseweed is now common in ​​temperate zones of Asia, Europe, and Australia. Luckily it has not negatively impacted natural habitats in those areas. Telegraph weed, however, has spread to Hawaii which as an island is particularly vulnerable to invasive species. There, telegraph weed can grow in dense patches that outcompete native plants. One way you can prevent the spread of invasive species when you travel is to clean your shoes because dirt caked in the tread may carry seeds.

As someone who works in vegetation management, I think a lot about what plants to remove and which to keep. What qualifies a species as a weed or an invasive plant? “Weed” is not a scientific classification, but purely subjective. Humans often decide what plants are desirable and which are weeds based on how they look. In habitat restoration we prioritize which plants to remove based on their impact on the ecosystem. Horseweed and telegraph weed, though they may look “weedy,” provide important habitat for native pollinators. Just because a plant is native however, doesn’t mean we always let it grow. Native plants may become invasive if they begin to dominate a landscape. Our primary goal in habitat restoration is to preserve biodiversity, and this is often a moving target.

Take a walk in your neighborhood and see if you can find telegraph weed or horseweed. I hope you will find new appreciation for their upright form and abundant flowers. Perhaps you will see pollinators visiting their clusters of flowers. Get curious about what’s growing in your backyard–you may decide to let these “weeds” grow.