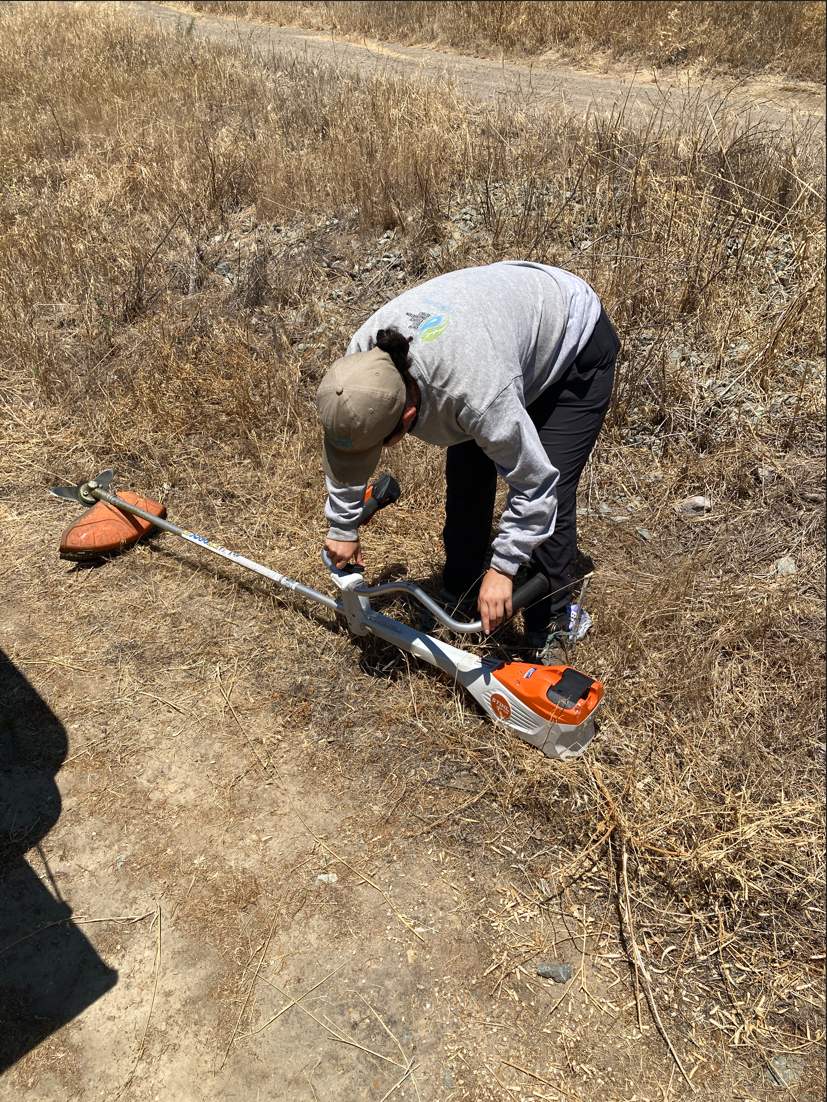 If you’re annoyed by the occasional leafblower noise in your neighborhood, consider how waterfowl react to a weedwhacker running for hours in the Delta. With the support of the Contra CostaFish and Wildlife Committee, Contra Costa RCD (CCRCD) has invested inbattery-powered tools to reduce noise and air pollution.

As part of the EcoStewards’ maintenance of habitat restoration sites, we regularly need to cut back invasive weeds such as perennial pepperweed (Lepidium latifolium), yellow star-thistle (Centaurea solstitialis), Himalayan blackberry (Rubus armeniacus), poison hemlock (Conium maculatum), and others. Left unchecked, these invasive weeds have the ability to dominate entire ecosystems, crowd out native plants, and decrease habitat quantity and quality for Contra Costa County fish and wildlife. Managing invasive plants at the landscape scale requires the use of powered tools to contain and reduce invasive plant populations before their seasonal lifecycle results in spreading.

Landscape professionals typically use tools with gas-powered, spark-ignition engines that run inefficiently and produce significant quantities of carbon dioxide and other smog-forming pollution. According to an estimate from the California Air Resource Board, using these tools for one hour can emit as much smog-forming pollution as driving a 2016 sedan 1100 miles. Ironically, using these tools for habitat restoration releases significant amounts of greenhouse gasses that contribute to climate change, pollute air quality, and create noise pollution that disturbs wildlife.

With commercial grade battery-powered tool snow on the market and local governments starting to restrict the sale of gas-powered landscaping equipment, the EcoStewards decided it was time to make the switch.Earlier this year, the Contra Costa Fish and Wildlife Committee awarded CCRCD with grant funding to purchase zero-emissions line trimmers and hedge trimmers as well as enough compatible batteries and chargers for a full day of invasive plant removal. After using these new tools for a few months now, we’ve found that they are just as effective as gas-powered tools and have the benefits of less vibration and are significantly quieter.

The purchase of new zero-emissions tools have allowed us to reduce air and noise pollution from necessary operations and increased the EcoStewards program’s capacity to benefit wildlife through habitat restoration. Removal of these invasive species increases ecosystem health, habitat availability, and native plant cover. And now we can do this work with decreased disturbance to wildlife and without breathing exhaust.

We encourage you to consider battery powered blowers and trimmers for maintaining your own garden. Multiple popular tool brands now offer battery-powered options available at your local hardware store. We’ve found through our work with these tools that they’re just as effective, more comfortable to use, and better for the natural resources we all share.